An economic model is merely a theoretical framework, and there is no inherent reason why it must be mathematical. If the model is mathematical, however, it will usually consist of a set of equations designed to describe the structure of the model. By relating a number of variables to one another in certain ways, these equations give mathematical form to the set of analytical assumptions adopted. Then, through application of the relevant mathematical operations to these equations, we may seek to derive a set of conclusions which logically follow from those assumptions.

A variable is something whose magnitude can change, i.e., something that can take on different values. Variables frequently used in economics include price, profit, revenue, cost, national income, consumption, investment, imports, exports, and so on. Since each variable can assume various values, it must be represented by a symbol instead of a specific number. For example, we may represent price by P, profit by 77, revenue by R, cost by C, national income by Y, and so forth. When we write P = 3 or C = 18, however, we are “freezing” these variables at specific values (in appropriately chosen units).

Properly constructed, an economic model can be solved to give us the solution values of a certain set of variables, such as the market-clearing level of price, or the profit-maximizing level of output. Such variables, whose solution values we seek from the model, are known as endogenous variables (originating from within). However, the model may also contain variables which are assumed to be determined by forces external to the model, and whose magnitudes are accepted as given data only; such variables are called exogenous variables (originating from without). It should be noted that a variable that is endogenous to one model may very well be exogenous to another. In an analysis of the market determination of wheat price (P), for instance, the variable P should definitely be endogenous; but in the framework of a theory of consumer expenditure, P would become instead a datum to the individual consumer, and must therefore be considered exogenous.

Variables frequently appear in combination with fixed numbers or constants, such as in the expressions 7P or 0.5R. A constant is a magnitude that does not change and is therefore the antithesis of a variable. When a constant is joined to a variable, it is often referred to as the coefficient of that variable. However, a coefficient may be symbolic rather than numerical. We can, for instance, let the symbol a stand for a given constant and use the expression aP in lieu of IP in a model, in order to attain a higher level of generality.

It must be duly emphasized that, although different values can be assigned to a parameter, it is nevertheless to be regarded as a datum in the model. It is for this reason that people sometimes simply say “constant” even when the constant is parametric. In this respect, parameters closely resemble exogenous variables, for both are to be treated as “givens” in a model. This explains why many writers, for simplicity, refer to both collectively with the single designation “parameters.”

As a matter of convention, parametric constants are normally represented by the symbols a, b, c, or their counterparts in the Greek alphabet: a, /3, and y. But other symbols naturally are also permissible. As for exogenous variables, in order that they can be visually distinguished from their endogenous cousins, we shall follow the practice of attaching a subscript 0 to the chosen symbol. For example, if P symbolizes price, then P0 signifies an exogenously determined price.

Variables may exist independently, but they do not really become interesting until they are related to one another by equations or by inequalities. At this juncture we shall discuss equations only. In economic applications we may distinguish between three types of equation: definitional equations, behavioral equations, and equilibrium conditions.

A definitional equation sets up an identity between two alternate expressions that have exactly the same meaning. For such an equation, the identical-equality sign = (read: “is identically equal to”) is often employed in place of the regular equals sign = , although the latter is also acceptable. As an example, total profit is defined as the excess of total revenue over total cost; we can therefore write

A behavioral equation, on the other hand, specifies the manner in which a variable behaves in response to changes in other variables. This may involve either human behavior (such as the aggregate consumption pattern in relation to national income) or nonhuman behavior (such as how total cost of a firm reacts to output changes). Broadly defined, behavioral equations can be used to describe the general institutional setting of a model, including the technological (e.g., production function) and legal (e.g., tax structure) aspects. Before a behavioral equation can be written, however, it is always necessary to adopt definite assumptions regarding the behavior pattern of the variable in question. Consider the two cost functions

where Q denotes the quantity of output. Since the two equations have different forms, the production condition assumed in each is obviously different from the other. In (2.1), the fixed cost (the value of C when Q = 0) is 75, whereas in (2.2) it is 110. The variation in cost is also different. In (2.1), for each unit increase in Q, there is a constant increase of 10 in C. But in (2.2), as Q increases unit after unit, C will increase by progressively larger amounts. Clearly, it is primarily through the specification of the form of the behavioral equations that we give mathematical expression to the assumptions adopted for a model.

which pertain, respectively, to the equilibrium of a market model and the equilibrium of the national-income model in its simplest form. Because equations of this type are neither definitional nor behavioral, they constitute a class by themselves.

Q No.2 Let the demand and supply functions are as follows. Find equilibrium price and quantity.

Matrix is uncompleted. So solution is not possible.

Q No.4 Use the Jacobian test for the functional dependence of the following: 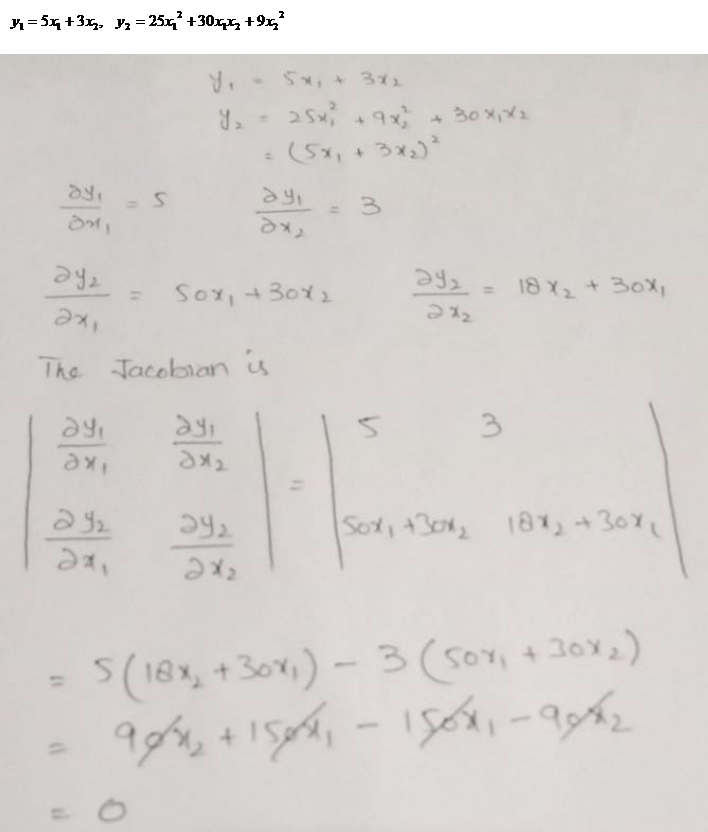 Q No.5 Find the total differential of the following: 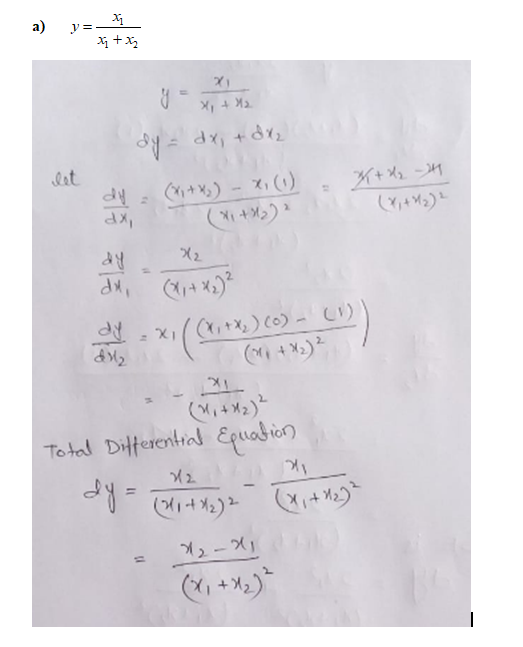 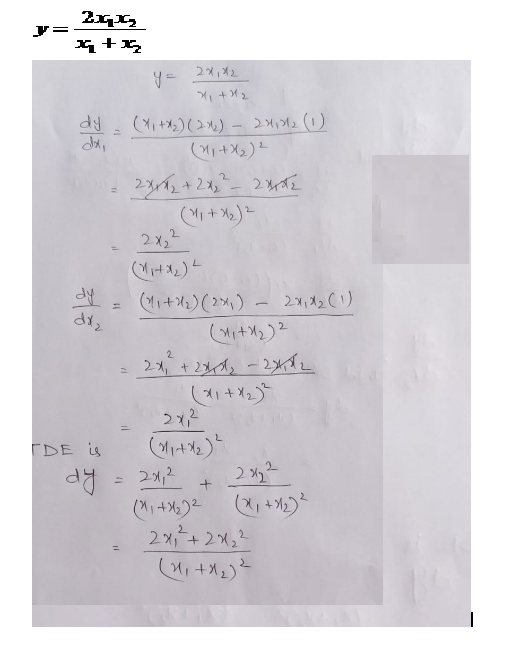